Please enjoy this information based on our experience, but we no longer breed the animals below, or have any contacts for them. 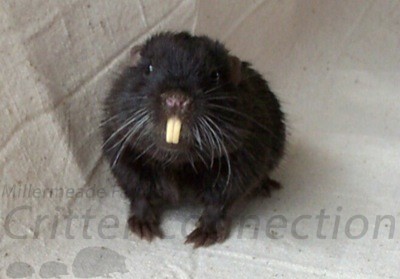 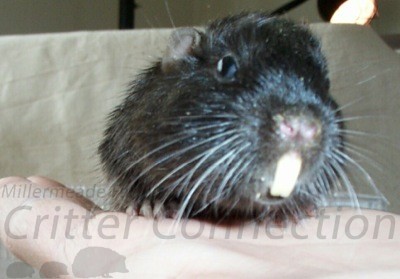 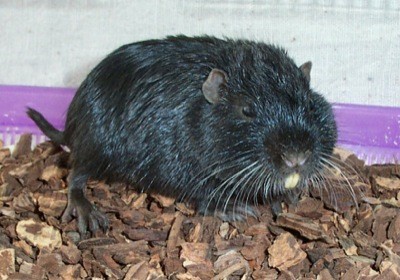 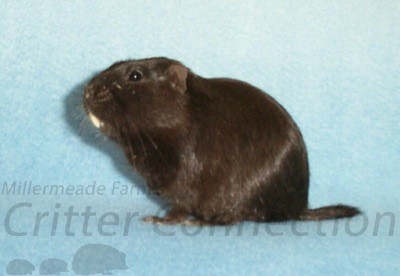 Our original two pairs were purchased at the Columbus Reptile Show in the fall of 2000. Since then we tried to locate other coruro breeders. The only person currently raising coruro babies that we have been able to locate lives in The Netherlands. We had good luck producing babies with our original pairs. We paired babies from each of the original pairs but none of the second generation pairings produced babies and we are not sure why they did not produce. It is possible that the animals must be a certain age before they start to produce. It is quite possible that the coruros needed a change in environment in order to produce or that the pairs need to be separated for a time and then put back together.

We are very limited to cage space here at Millermeade Farms and we believe the coruros will have better luck producing in a different environment. We sold our entire breeding colony to a woman in Canada. She did not give me permission to pass along her name and contact information.

Below are our production records and a testimonial from a coruro owner.

Coruros can make wonderful pets. When litter 1a was born we handled the babies on a regular basis and they were quite friendly and enjoyable. We have not handled the other animals on a regular basis. Some coruros will tolerate handling and others will not. I have been nipped by the coruros but not severely bitten. I pay attention to their body language and how they are reacting to me. If they act aggressive I either use gloves or a small container to transfer them when I'm cleaning their cage.

Here's a testimonial from one of our satisfied customers:

Lori Keller runs an International Hedgehog Association accredited Rescue Station. In November 2002, Lori adopted one of Millermeade Farms original adult male coruros after he lost his mate. Even though the coruro had never been handled he has turned out to be a fabulous pet. Below is a portion of an email Lori sent to me to let me know how the coruro has adjusted to its new home. Gail- This coruro (Martin) is absolutely FABulous.

Martin shed out his teeth almost immediately - 1 on Saturday, and 1 on the way to the vet office on Monday. Today, he has 2 new front teeth about 1/8 inch long. I'm amazed - these things grow so fast!!!

I've already left him at the vet office for a day just so everyone could play with him - my vet asked if I'd bring him in and leave him for them to play with!! I took him to work and showed him off - he just lounged in everyone's hands and impressed them all like crazy.

So- Martin is in my large, um, like 65 gallon aquarium. It's about 2 feet wide and 4 feet long - it's short, not a real tall aquarium. It's filled about 5 inches deep with potting soil. there are 2 'half logs' in the tank with him that he hides under, plus his favorite tin can. He absolutely loves digging. when he's startled, he hides under a half log and spurts dirt out the back end with his back feet. He can toss dirt about 2 feet. It's amazing!!! He stands still and lets me scoop my fingers under him to pick him up. He tends to back up if he's startled, so Brian (my husband) and I are really careful to hold him close to us. He loves to be pet. He'll lay down flat on my chest or arm and close his eyes while I pet him. If I leave him alone and cup a hand over him, he'll eventually turn around in circles a few times, and then flop over on his side to sleep. Then, after about half an hour, he turns onto his back with all four feet in the air. I can rub his stomach, touch his little hands, his chin... he'll twitch a bit if I tickle his ears or the fur on the tops of his back feet.

He also dreams. When he's deeply asleep, he'll go through 5 to 10 minute periods where he dreams. He'll wiggle his hands and feet, his whiskers twitch, his mouth twitches like he's eating something or trying to make noise...it's just too, too funny to watch!!! When he wakes, he flips over and stretches waaaayy out, and then yawns. Did you know what an incredibly large jaw these critters have? He can open his mouth wide enough that I can put my thumb AND index finger in between his top and bottom teeth and just barely have my thumbnail and fingernail touching the bottoms of his teeth! It's a little scarey!

I have lots of food choices in the tank with him: sweet potato, idaho potato, shallots, carrots, turnips and apple. He's keen on the carrot and apple and is just now trying some of the other foods. Anyway - he eats an incredible amount. Half an apple plus 2 or 3 little carrots! I've been cutting his food into little diced up pieces, and he seems to like that just fine. He does NOT like the cooked sweet yams from a can. :-)

He's incredibly calm and responsive to touch...his little tail is prehensile, and he'll brace it around my hand or finger when he's sniffing the air or getting ready to hop up out of my hand... or when I'm walking and carrying him. Martin's curled up in that carry pouch I bought from you.. he's nestled in one of my clean socks. He loves to have his head uncovered- he'll rootch around, curl up and then pop his little head out. Looks like he's tucking the covers under his chin. Too cute. :-)

Martin is a huge hit!

We hope that you enjoy the information found on this site.

All material on this site is for personal use only. Information may not be copied without expressed written consent.
Privacy Policy. Copyright 2007-2021 Gail Smith. All Rights Reserved.